Bollywood’s Kapoor family is a powerhouse of talent that has given the nation multiple superstars as well as a lot of blockbusters. But this is not all that we admire this family for! It is also the power-packed wedding celebrations of the Kapoor khandan that make us fall in love with this super-fun family even more. It was Sonam Kapoor’s wedding to Delhi-based businessman Anand Ahuja recently that gave us truckloads of ideas to get inspired from. Well, if this big fat (and fun) wedding wasn’t enough for you, then there also was Sonam’s cousin, Mohit Marwah’s wedding to GQ’s Fashion Editor, Antara Motiwala, a few months ago, that redefined destination weddings for us. Having seen the lovely pictures of the beautiful wedding celebrations of the Kapoors, we just couldn’t resist sharing with you some of the amazing trends that we spotted in their big fat festivities. 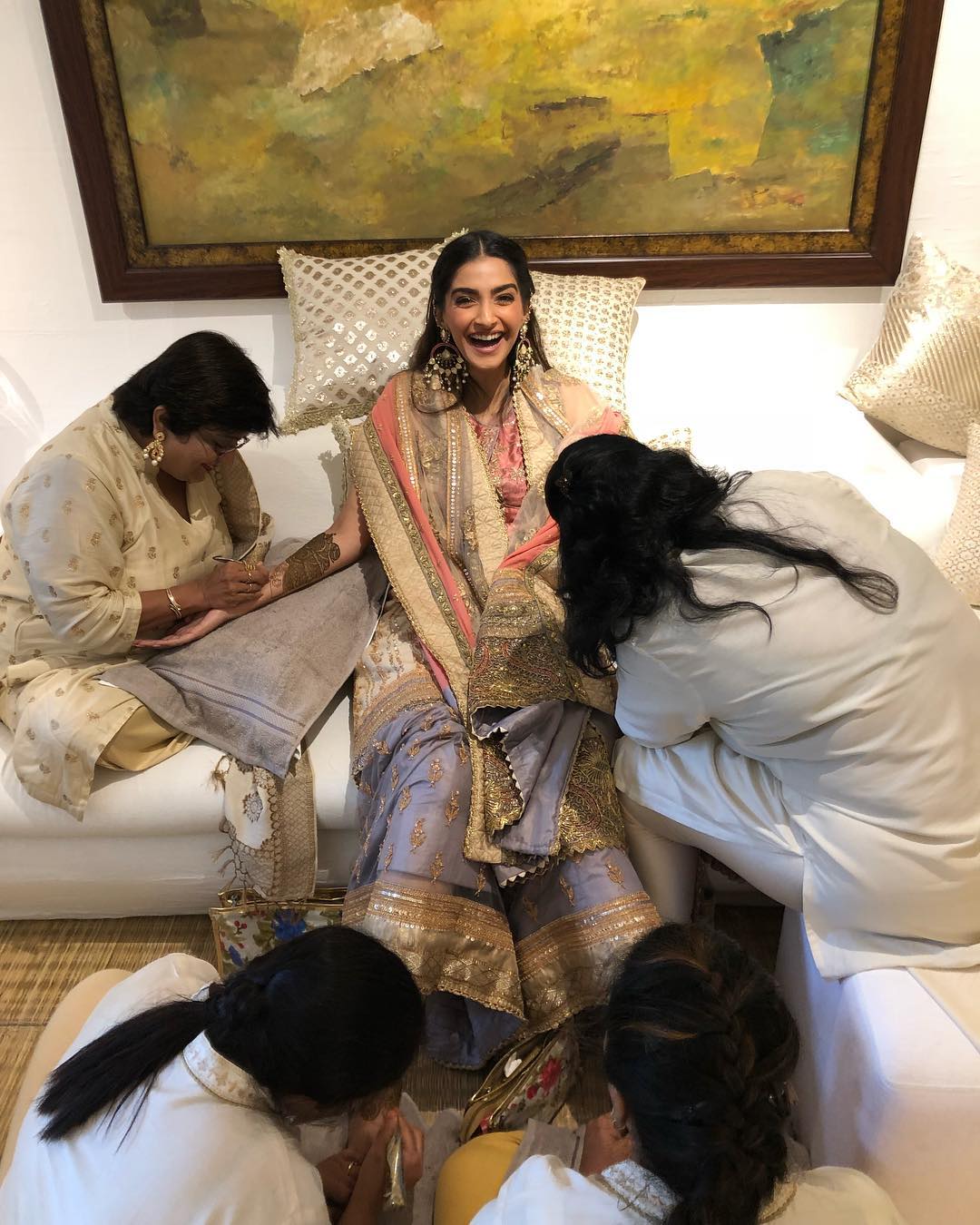 We have seen the trend of many celebs opting for one intimate wedding ceremony with only family members and close friends in attendance followed by a grand one with the entire tinsel town present in it, Kapoor family being the Kapoor family, did it quite differently! They opted for two mehendi ceremonies for Sonam Kapoor and Anand Ahuja. 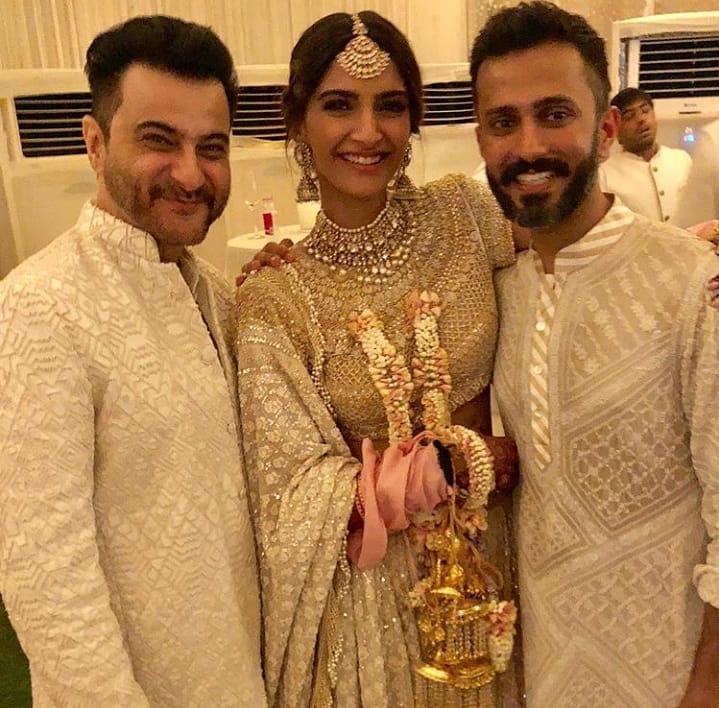 First was an intimate one where only the bride, her family members and the closest of her friends got their hands adorned with henna. Second was one heck of a lavish mehendi ceremony with who’s who of Bollywood in attendance. There is no denying that when it comes to style and quirkiness, no one can ever beat Sonam Kapoor. So when it was time to flaunt some of it at her own wedding, it came quite naturally to her. She ditched the heels and wore a pair of Nike slippers instead with her heavily embellished sharara at her mehendi. With this, Sonam clearly gave us some serious “cool bridal shoes” goals.

Still want to go for the high heels? Check out these 13 Drool Worthy Shoes For Your Big Bridal Moment 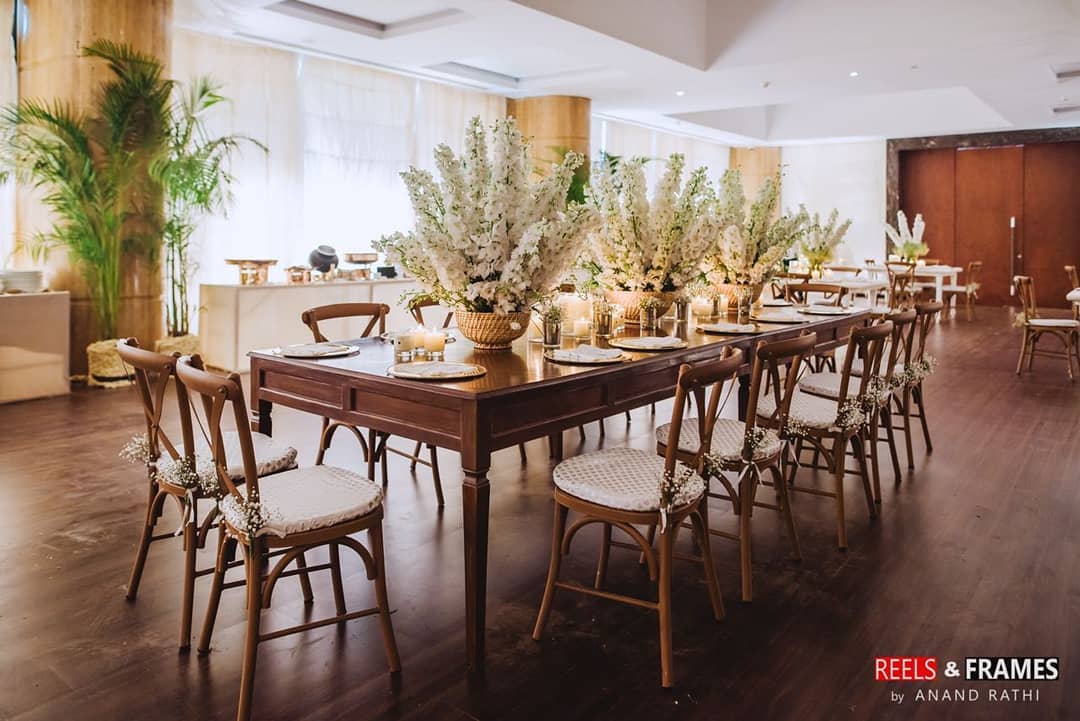 After a low-key mehendi ceremony, Sonam and Anand had a grand mehendi ceremony which was attended by all the big wigs of the entertainment world. The Kapoor family opted for a refreshing theme for this event. Unlike the vibrant hues that are usually seen in a mehendi function, this one had a white and gold theme.

Right from the décor to the dress code, everything followed this classy color scheme. One of the key highlights of décor was the intricate mirror work inspired by Gujarati style. After wearing cool and comfy Nike slippers at her first mehendi ceremony, Sonam took her shoe game a notch ahead in the next function. At her second mehendi ceremony, she opted for a pair customised Jimmy Choo footwear that had ‘A♡S’ written on the sole. 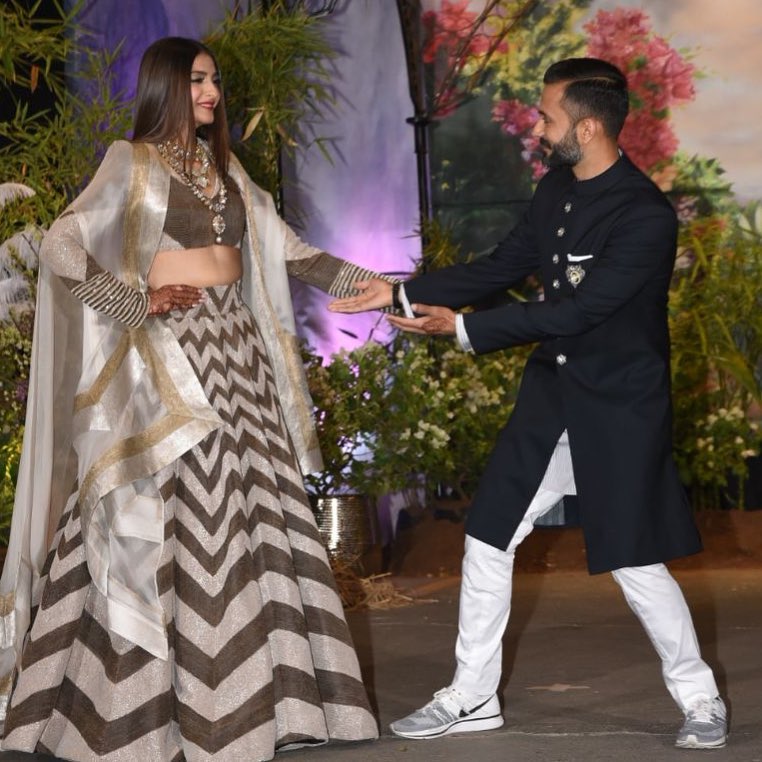 Well, the groom was no less when it came to set some new benchmarks. He flaunted his love for sneakers by teaming them up with his traditional attire at his reception. 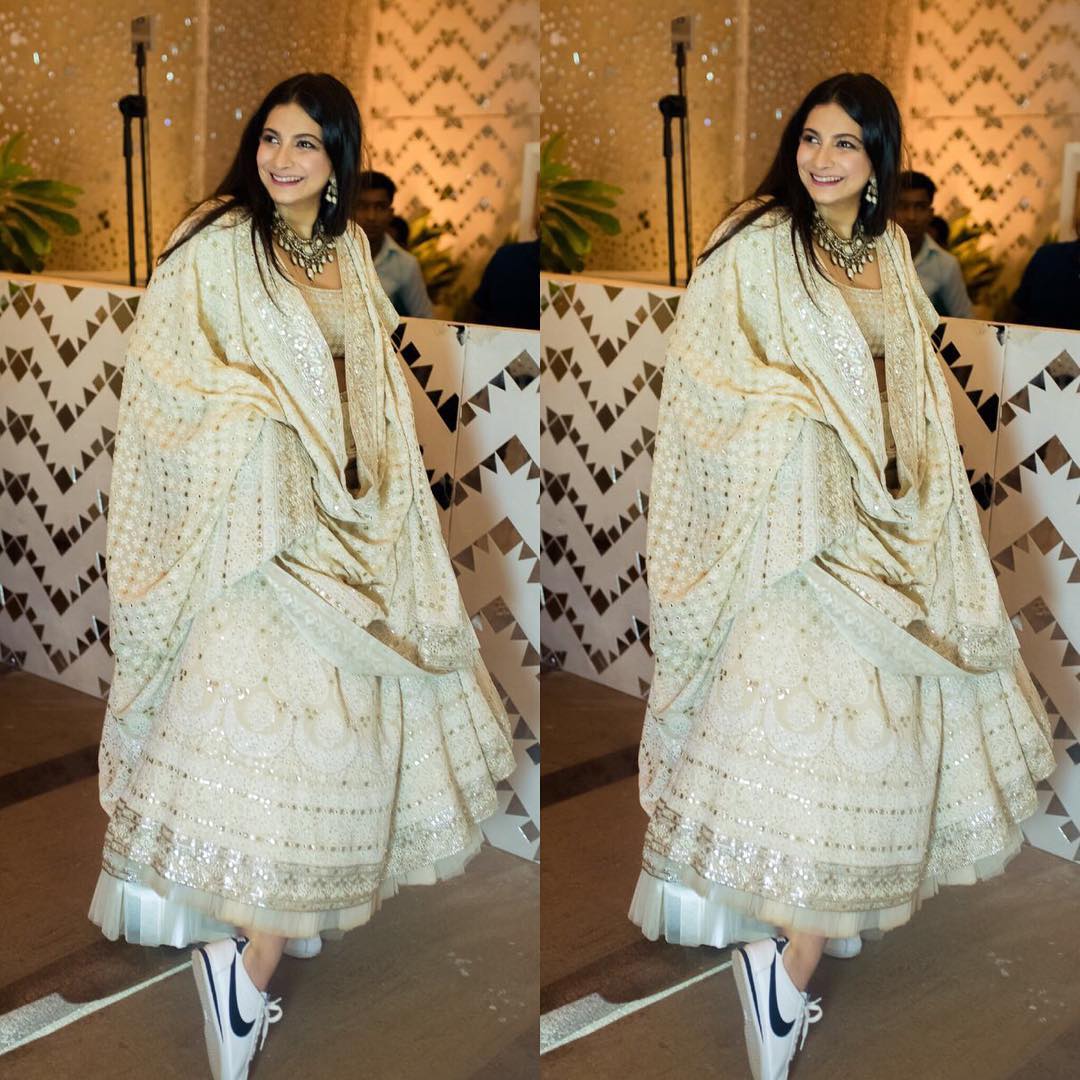 Anand even got a shoe partner as his ‘saali’ Rhea Kapoor too wore a pair of Nike with her Abu Jani Sandeep Khosla lehenga. Now we know why the Kapoor family is known as the fashionista family of Bollywood.

5. A Celebration That Not Only Looks Good, But Also Smells Good The Kapoor family left no stone unturned to give their guests an out of the world experience. The mehendi which looked surreal because of the classy white and gold theme, smelled even better with the scented candles from luxury fragrance house, Jo Malone London. The bride picked English pear & freesia and lime basil mandarin candles for the event to create an enigmatic aura.

Also, check out these 15 Best Budget Fragrances Of 2018 For Indian Brides And Grooms

Our fashionista bride Sonam Kapoor stunned us with the unusual choice of colors that she donned at her wedding reception. It was a copper-grey creation by Anamika Khanna which she teamed up with multi-strand diamond necklace. We absolutely loved the way she complemented her ensemble with simple bold red lips and neatly done straight loose hair. 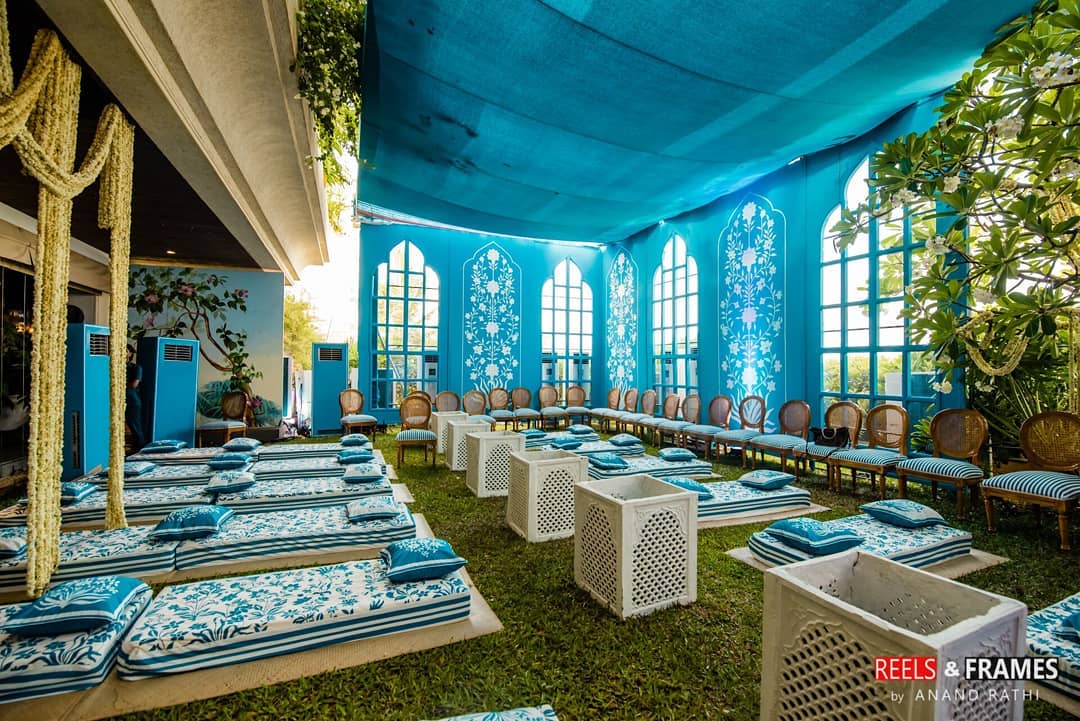 The décor at Sonam Kapoor and Anand Ahuja’s wedding was absolutely Pinterest-worthy.  What made everything about this wedding and its décor all the more special was the fact that it took place at home. The wedding decorators, Rani Pink, shared these details behind the décor:

The venue was absolutely spectacular. It was home which made it even more special. The idea was to create modern contemporary Jaipur. We decided to re-create elements of the most beautiful Bar palladio. All the walls were handpainted and the jaali windows were customised. Nature was the inspiration for Sonam and Anands ceremony backdrop. It was a symbol of growth, positivity and the beginning of a beautiful new journey. It was all heart just like the couple.

8. The Quirky And Uncustomary Cakes

Sonam and Anand’s wedding cake was a fun one with a cute story behind it. The two-tier cake, which was created by celebrity chef, Pooja Dhingra, had a very interesting topper by MakeWhale. It had the bride dragging the groom out of the basketball court. Well, those who follow this couple closely, know that Anand is an avid basketball fan. So, the cake just revealed an adorable part of their love story. 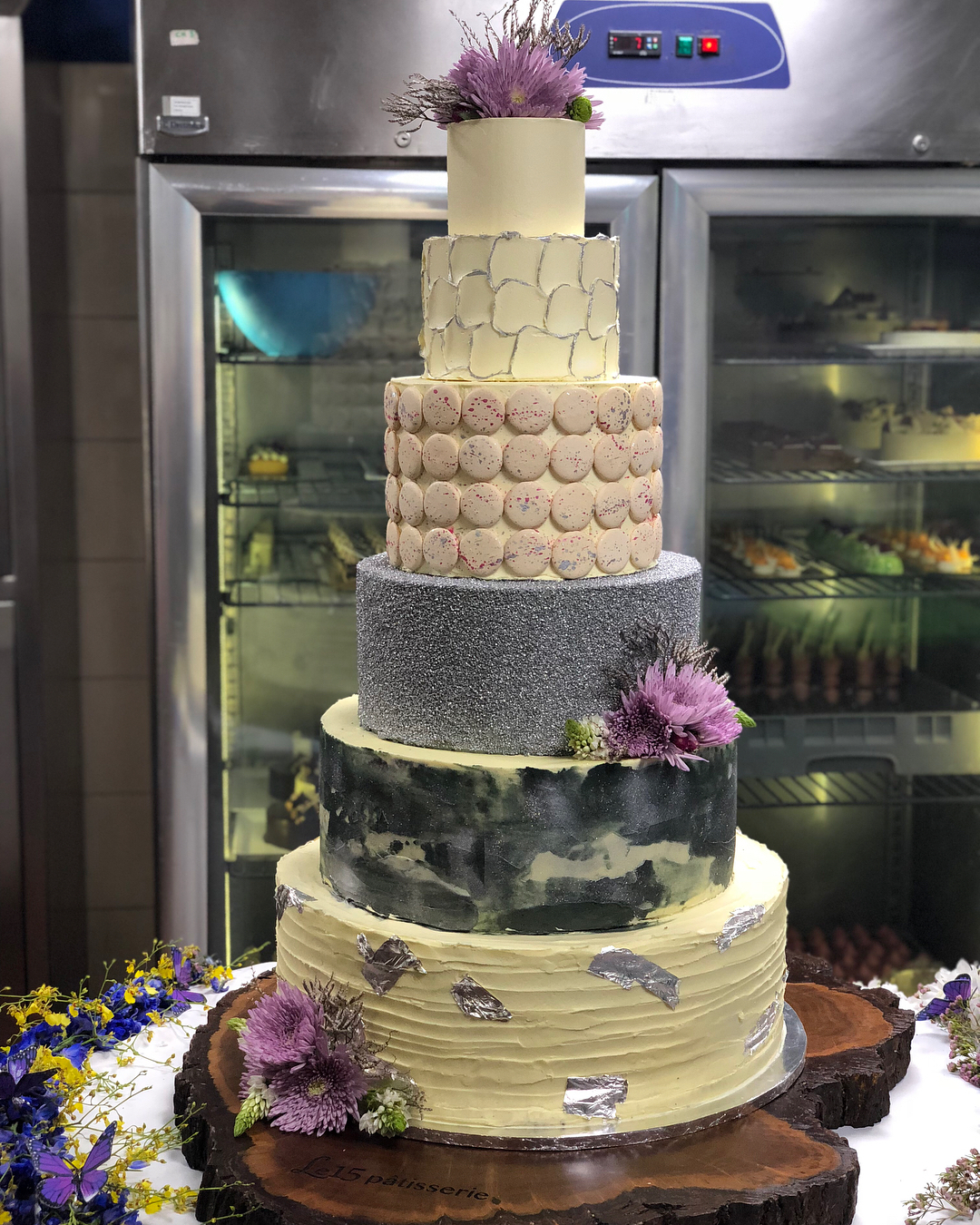 For their reception, they opted for a grand six-tier cake which too was made by Pooja Dhingra. Giving the details of the cake, here is what the baker Pooja said:

This was one of the hardest cakes for me to design because what can you make for a couple that’s anything but conventional. A couple that doesn’t fit into boxes. Something with layers, with textures, where colours merge and blend and shine. Something with structure but also flowing, something solid but full of warmth and love.

Apart from these two, here are some more Impressive Wedding Cakes We Found on Pinterest

When Mohit Marwah, who is Boney Kapoor, Anil Kapoor and Sanjay Kapoor’s sister’s son, tied the knot with GQ’s Fashion Editor Antara Motiwala, the destination was something that caught everyone’s attention. The wedding took place at the very exotic resort, Waldorf Astoria,Ras al-Khaimah, in UAE. The palatial ambience of the wedding venue surrounded with the natural beauty of the beach made it look every bit regal. Clearly, no one understands the meaning of grand destination wedding better than the Kapoors.

10. The Poetic Welcome And Goodbye 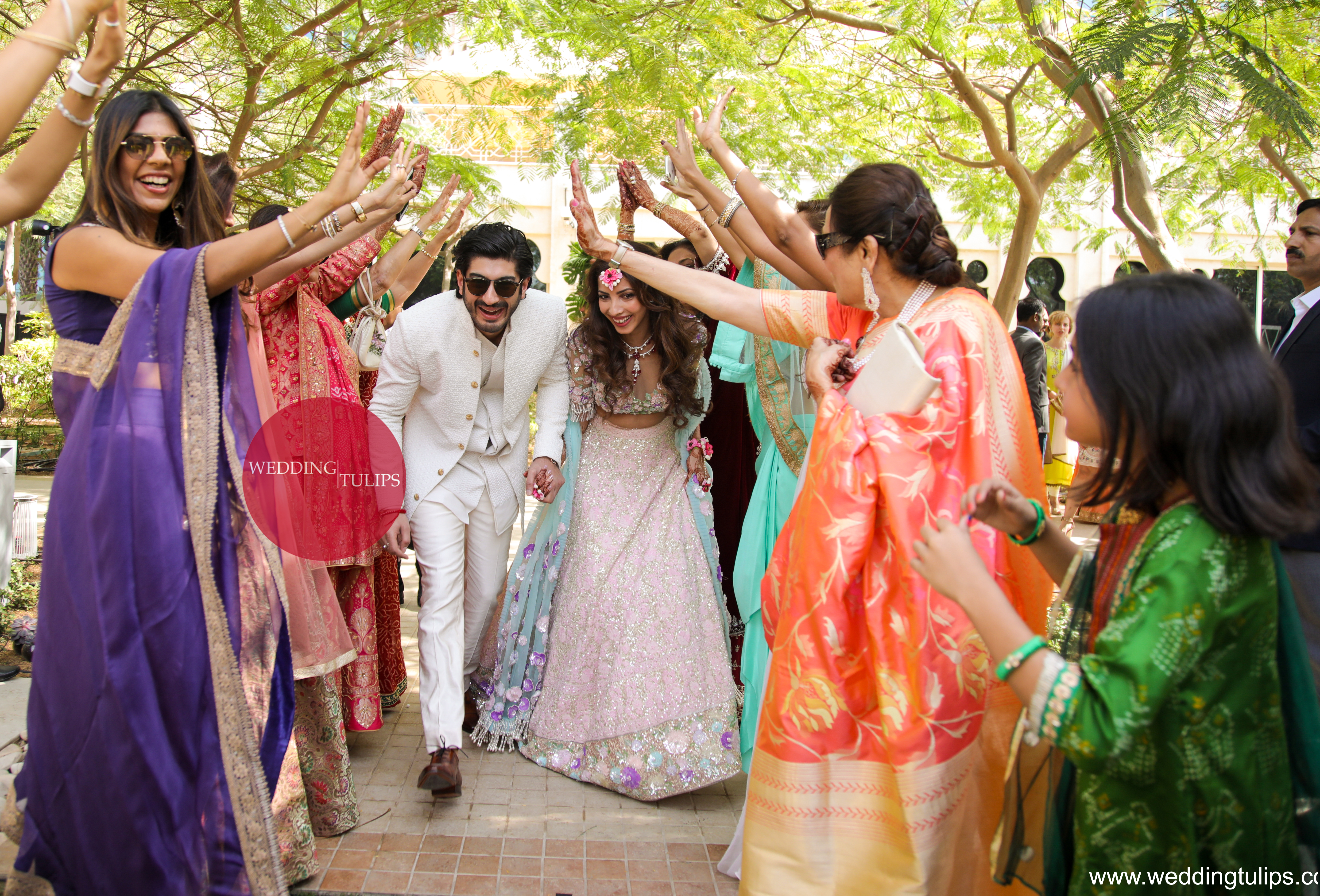 Mohit Marwah and Antara Motiwala’s wedding celebrations began with the mehendi function. When they entered their mehendi venue, their friends and family members created an arch symbolizing their love and support for the two. 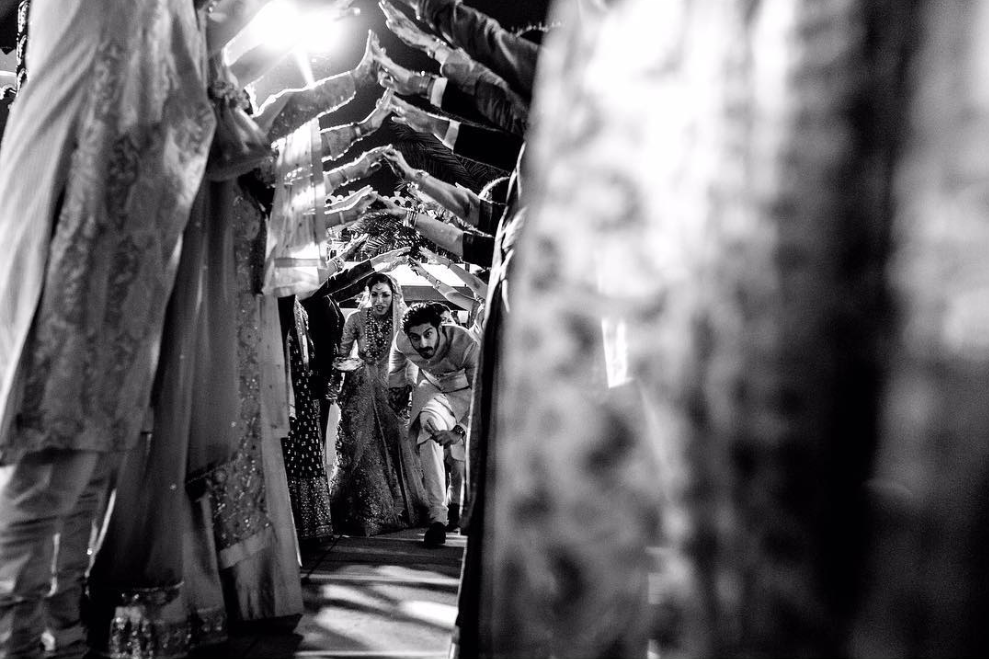 They did the same thing when all the wedding festivities got over and it was time for the vidai. Quite a thoughtful welcome and goodbye style, isn’t it?

Check out some more unusual yet surreal vidai moments HERE

The décor at Mohit and Antara’s sangeet was yet another inspiring thing that the Kapoor family gave us. It was the metallic theme with cages, lights and golden leaves that exuded an elegant aura. We loved the way the entire décor was complemented with black upholstery.

So, this was all about the fabulous wedding ideas we spotted at the weddings that took place in the Kapoor family recently. For more such out of the box wedding ideas, all we can do is wait for the next weddings in the Kapoor clan. So Rhea, Arjun and other Kapoor kids, are you listening?

‘Viva Magenta’ The Pantone Color Of The Year 2023 20+ Boho Mandap Designs You Should Be Bookmarking Right Now! 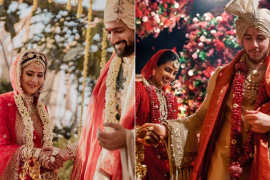 Significance And Meaning Of 7 Vows Of Marriage