2019 is going to be a year of many big-budget films and the one that has become the talk of the town is Karan Johar and Sajid Nadiadwala’s movie, Kalank. His multi-starrer film will be a treat for many fans as they will get to see some famous actors working under the same banner. Madhuri Dixit and Sanjay Dutt will come together for a movie after a very long time. Sonakshi Sinha, Aditya Roy Kapoor, Kunal Khemu and Varun Dhawan are also in the leads. While every actor is playing a crucial role, it is the young and talented Alia Bhatt who has kept the media buzzing with this film. She regularly posts about this movie on her social media handles, especially Instagram.

The director of Kalank, Abhishek Varman has been very discreet about the movie. Other than the star-cast, nothing has been revealed about this movie. However, a video of Alia Bhatt in bridal wear from the sets of Kalank song has been leaked. She is seen dancing on a Rajasthani song and a picture of her bridal look have been leaked from the sets.

In the photo, Alia can be seen donning a traditional bridal look. She is wearing a bright red and golden lehenga with a kurti-style blouse. She is wearing a Rani Haar, with a choker and a panchlada necklace. She can be seen wearing a matching matha patti and jhumkas. We are in awe of her big kaleeras and chunky hathphool. Just like always, Alia’s makeup is kept to a bare minimum.

Her gorgeous on-screen bridal look makes us wonder how beautiful she will look at her own wedding. Since Ranbir Kapoor and Alia Bhatt are getting serious, we can hope that it happens soon. Alia spent Christmas and New Years with Ranbir Kapoor’s family in New York. They are often spotted together and Alia even shares their couple photos on Instagram. While there is no official confirmation from either one of them, their vacations are enough to tell the tale. Do you think that like Priyanka and Deepika, Alia, too, will be a Sabyasachi bride? 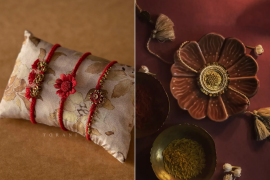